This is the background to the Channel 4 News piece, broadcast on 9th August.

In January 2010 we set up a Facebook fan page for Charity Engine. The app was still a long way from being released but, as Facebook had recently introduced vanity URLs, we figured we'd better grab www.facebook.com/charityengine while we could.

The fan page just explained how Charity Engine worked and that we'd message the fans the moment it launched. Almost as an afterthought, we also posted 92 test adverts to find out what the 92 different nationalities on Facebook thought of the concept.

The response was amazing.

By November we had over 100k fans from all over the world. As Charity Engine needed just 10k users to be successful, this was hugely exciting. Pretty much anyone with a PC could be a Charity Engine user, regardless of income or location (it's a free app) and Facebook fans obviously had PCs.

It was by far the most cost-effective way to build up a pre-launch mailing list. We'd be making our Big Announcement to 300k, maybe even 500k pre-qualified leads and even if only 2% downloaded it, Charity Engine would be cash-positive from day one; on track to give away its first million-dollar prize (and donation) within its first year.

By November the app was ready. The first payout would be $20,000, half for the charities and half as a prize. The Big Announcement was already written. We just had to send the update.

And that's when we found out, to our absolute horror, that Facebook had done this:

“We want you to connect with your fans in the most effective way possible. That's why as of September 30 you'll no longer be able to send updates to fans using Facebook Messages. The best way to make sure your content is seen is to post it on your Wall so people see your updates in their news feed.”

With group messaging no longer possible and wall posts being shown to just a fraction of our fans, the page was now virtually useless. Facebook had effectively deleted our huge, valuable, opted-in mailing list in a single stroke. We had a fan club we couldn't talk to.

As the page was not worth growing any more, we switched our Facebook adverts to point at www.charityengine.com instead. But the clicks Facebook reported never tallied with the clicks our website reported – always in Facebook's favour – and the conversion stats were bizarre, with a huge number of clicks that landed on our homepage then left before the page even had time to load.

Whether these were accidental clicks or fake profiles, we'll never know. But we did find lots of fake profiles had also liked our page by clicking our adverts. We even found the same profiles that the BBC highlighted in their story about Virtual Bagel, a non-existent joke business that exposed this problem.

When Facebook profiles click Facebook adverts and like a Facebook page, everything is recorded within Facebook. At the very least, Facebook should be refunding advertisers whenever it finds and deletes a fake profile, because it knows everything that profile ever did. Instead, Facebook keeps every penny, hides all but the most recent 500 fans from page owners, refuses to allow independent auditing of its advert system and will not even discuss the subject of click-fraud.

A year after Facebook removed group messaging, we finally got the option of promoted posts. Facebook will indeed display wall posts to our fans now, but only if we pay up to $4500 each time (!) and agree that Facebook will show them to fans' friends as well. 'Just fans' is not even an option.

So not only have we paid once to obtain at least 100k (and we suspect over 400k) fake or inactive users, we have to keep paying for them over and over again. And if we don't pay to promote a post, less than 1% of the fans will ever see it... 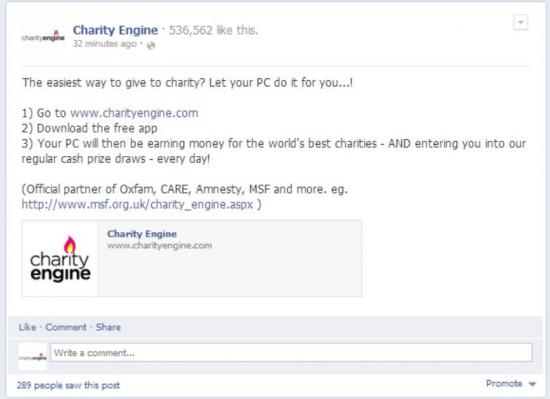 Sure, with hindsight we could have done things differently. But even if we'd run the perfect Facebook page, it wouldn't have changed the outcome. We'd still have been cut off from group messaging, still paid for 1000s of fake followers – and still be staring at the same new fees and falling stats thinking they broke it so they can charge us to fix it.

No, with hindsight we'd have just advertised Charity Engine in the New York Times instead. Their readers are all real people.

The day before our Channel 4 News interview about fake fans, our page suddenly gained 1600 likes overnight for no reason. Unusually, most appeared to be genuine and it looked like we might not be able to show Channel 4 much evidence of fakes. Fortunately, a test advert then activated and the most recent 500 were quickly stuffed with obvious fakes once again.

Meanwhile, the C4 News team managed to track down one of the 1600 strange new likes. It was indeed a real person, but they had never heard of Charity Engine and had no idea they had liked the page.