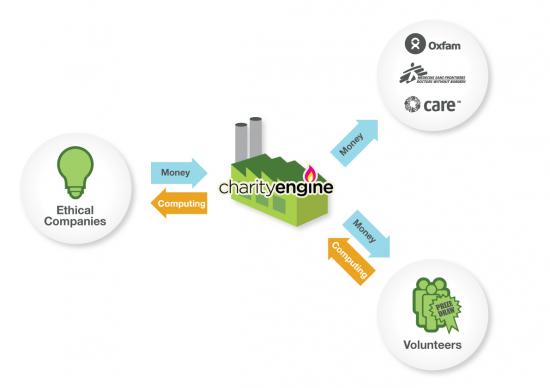 How we raise money for great causes -- and the prize draw

Charity Engine is based on volunteer computing. The principle is to take enormous, expensive computing jobs and chop them into 1000s of small pieces, each simple enough for a home PC to work on as a background task. Once each PC has finished its part of the puzzle, it sends back the correct answer and earns some money for charity – and for the prize fund. (It also earns more chances to win.)

Where does the money come from? Science and industry. The grid is rented like a giant supercomputer, then all the profits shared 33-33-33 between ourselves, the charities and the lucky prize winners.

Charity Engine typically adds less than 10 cents per day to a PC's energy costs and can generate up to $10 for charity – and the prize draws – for each $1 of electricity consumed.

It is the most efficient way to donate to charity ever invented.

How the prize winner is chosen

When Charity Engine announces a prize draw, the List of Entries is published and a date for the draw chosen in advance.

The List of Entries shows each user's unique ID number and how many prize draw entries they have in total. Everyone can verify their own place on the list and the block of numbers assigned to their entries. Any mistakes must be reported within 48 hours, then the list is final.

We then begin choosing a random number by noting the last digits of the following stock market closing prices, beginning on the date of the draw:

Tokyo (Nikkei 225), Hong Kong (Hang Seng), Mumbai (Sensex), Frankfurt (DAX) and finally New York (Dow Jones). Each is in a different time zone, so the winning number is revealed one digit at a time. The draw typically takes two or three days to complete.

The prize winning number is chosen right-to-left, so that the largest digit is the last one revealed. If a stock market chooses a number that is too high for the final digit, it is discarded and we keep going until a valid number is chosen. Human hands are never involved.

Last digits of stock market closing prices are completely random and mathematically impossible to predict or tamper with in any way. That's why we use them for Charity Engine.

Please help us make Charity Engine the most energy-efficient grid on the planet by turning your PC off when not in use. We only want spare computing time from PCs that are switched on anyway. Keep it green!